Back to Winning Ways as LAFC Take Down The Columbus Crew 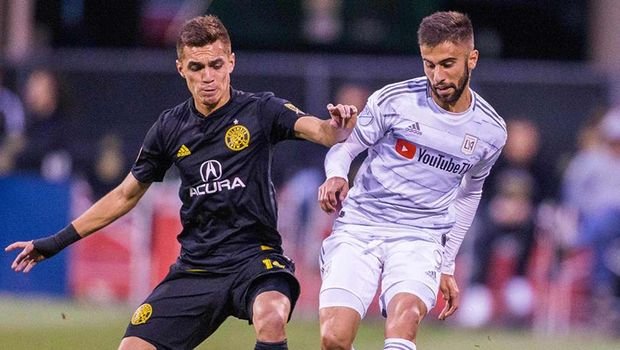 Matchday 12. The Black and Gold take on the Columbus Crew in the clubs 2nd meeting. Last year, the Black and Gold won 2-0. This time, we play in Columbus. The Crew are coming off a 3-1 win over the Galaxy, but we’re on a 5 game losing streak before that. LAFC are looking to get back on track after 2 straights draws against the Fire and the Sounders. LAFC needs to keep an eye out for Gyasi Zardes, who has scored 4 goals in 2019.

And we are off. Columbus has started off playing a very spread out ame, using the wings well. On the other side of the ball, LAFC have been creating good chances. Mark Anthony Kaye and Eduard Atuesta had two very close shots.

20 in. It’s an amazing start from LAFC, controlling the ball in their half and taking their shots. The Crew have had their attacks, mainly playing the wings and crossing in.

Another note: Steven Beitashour is playing the full wing, up on scoring chances. This  is great for LAFC, having another man up.

And it’s an LAFC GOAL! Mark Anthony Kaye gets us on the board, finishing off a cross and putting it past Joe Bendik. (Watch here: http://bit.ly/2Vzr2nt )

That's the first half. With MAKs goal, LAFC goes into the half with a 1-0 lead. If LAFC can keep it up, there is definitely another one coming.

We are on for the second half. For the first 10 minutes, it has been back and forth. 59th minute, the Crew are on the attack and blast a shot into the corner, only to be denied by Tyler Miller, who has come up big in every game this year. (Watch here: http://bit.ly/2vS4BdQ )

86’: Walker Zimmerman and the LAFC defense coming up big on defense, with some big **legal** tackles to keep LAFC ahead.

That's the game. LAFC takes their 8th win of the year against struggling Columbus Crew 3-0. A great game by LAFC, controlling the match and playing out of the back. Tyler Miller and the LAFC defense also got a clean sheet in Columbus. Goals came from Mark Anthony Kaye, Adama Diomande and Carlos Vela.