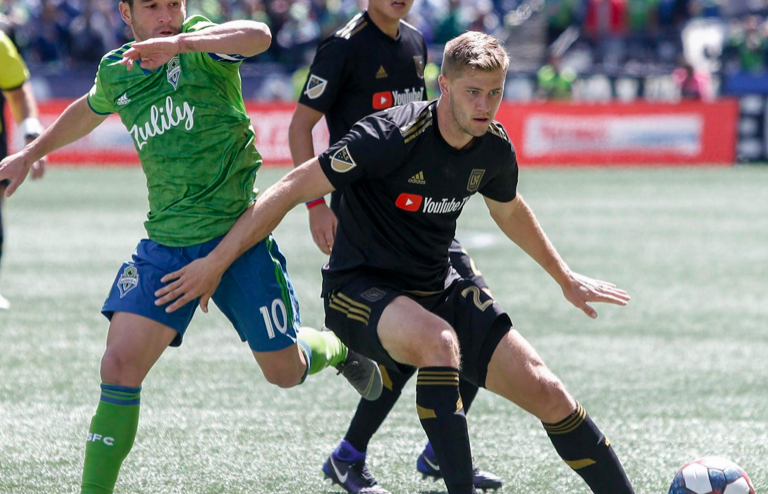 Matchday 10 and LAFCs second match against the Sounders this year. LAFC played Seattle just a week before this, winning 4-1. They “Dissected the Sounders”-Jon Champion, and now get to play them. During the week, Steven Beitashour had a left knee soreness and was said to be questionable, but did not start the game. Instead, Tristan Blackmon gets his first start of the year, alongside Zimmerman, Segura and Harvey.

50 seconds in and we are down 1-0. Eddie Segura plays the ball back (?) and Jordan Morris easily intercepts it and puts in past Miller for an easy goal. This is the first mistake our two center defenders have made all year.

4 minutes later, and Diego Rossi is in on net. He plays it across and Carlos Vela gets the easy goal. Stefan Frei got a hand on it, put couldn't stop it. 1-1. For the first 10 minutes, we have basically been back and forth, both teams having their chances. Vela is getting in some good crosses.

2 minutes of added time follow the second half. And that is the half. The teams go into the half all tied up at 1 a piece. The second half is on. Christian Ramirez oh so nearly scored. And that should have been a PK. Diego Rossi gets taken down from behind right in the box. No call. Anywho, Mohamed El-Munir comes in for Jordan Harvey and Lee Nguyen came in for Tristan Blackmon.

Tyler Miller continues to come up big with saves against his previous club. Adrien Perez has also been playing great, creating chances and being oh-so close to finishing them. LAFC have had so many chances in this second half, especially in these last ten minutes. 4 minutes were added on to the second. That is insane defense from the club. And Diego takes it to the other side and gets taken down outside of the box. Insane!

Foul seems to be outside of the box . But after VAR, Sounders receive their second red card. Morris is also coming off in the 95th minute. This is a huge opportunity for LAFC. The wall isn’t even 10 yards, and Vela sends the ball over. Latif needs to dive for balls and stop using his feet.

And that's the game. LAFC tie 1-1 with the Sounders.