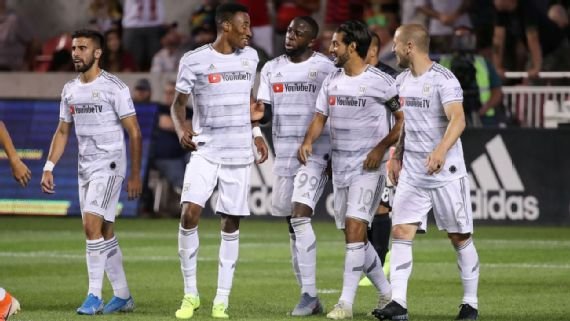 LAFC traveled up to the mountains of Salt Lake City, Utah to take on Real Salt Lake. The opponents, you guessed it: Real Salt Blake. No. Real Salt Lake. RSL sits 4th in the west, with a 3 game win streak, and have not lost an MLS match since July 6th. They recently let go of their head coach, Mike Petke, after he was fined and was on a suspension after sideline antics. Their interim head coach, (former assistant) Freddy Juarez, had just taken over the club.

Thru the first half, LAFC had shots on net, but none in the back of the net, as Nick Rimando proved to be RSLs Man Of The Match in my opinion, with 4 huge saves.

Both clubs would go down to ten men. Walker Zimmerman received his second yellow card of the match in the 48th minute for unsporting behavior while RSLs Aaron Herrera was given a straight red for denial of obvious goalscoring opportunity, which led to the first goal of the match.

Carlos Velas 64th minute goal from the penalty spot proved to be the difference. A record breaking goal as well. With that goal, Carlos Vela had passed Giovinco for most goals/assists in a year. 39 to be exact, with 9 games left in the season.

Adama Diomande would finish off the day with a goal in the 82nd minute on a great ball from Lee Nguyen. That would be the final score. LAFC bring home 3 points and a playoff spot with a 2-0 victory. LAFC takes on the San Jose Earthquakes this Wednesday at 7:30 at the Banc, then the Galaxy on Sunday at 7:30. Get your tickets here: bit.ly/ticketmastercentral