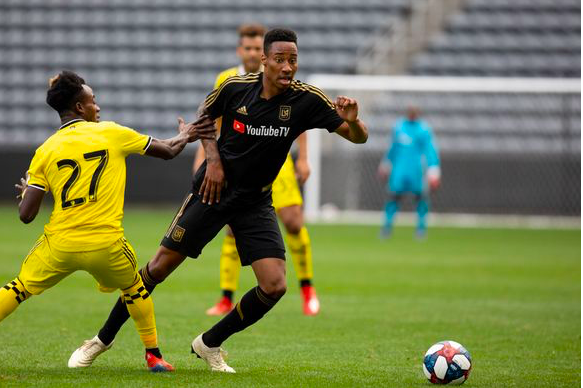 2 games in, 2-0. Next LAFC got to play the Columbus Crew. LAFC came into the match in a 4-3-3 formation, with Tyler Miller in goal as usual. Newcomers Mohamed El-Munir and Eddie Segura, as well as returning Jordan Harvey and Shaft Brewer Jr started in the back. You will see Shaft playing in the back this year. Alejandro Guido, Eduard Atuesta and Andre Horta played in the mid. Christian Ramirez, Carlos Vela and Latif Blessing started up front. This was Christians first game back with LAFC, after spending the month of January with USMNT.

It was back and forth with LAFC scoring first. Alejandro Guido hit a low cross that deflected in for an own goal. Columbus came back making it 1-1 at the half. The second half began with Bob Bradley making a hand full of changes. Phillip Ejimadu came in for Tyler in goal. Jordan Harvey, Eddie Segura, Dejan Jaković and Latif Blessing started in the back. Yes Latif played in the back. Like Shaft Brewer Jr, Latif is a speedster and plays the wing.
Draft picks Javi Pérez and Peter-Lee Vassell along with Mark Anthony Kaye took the middle, with Adrien Perez, Lee Nguyen and Christian Ramirez up top. LAFC struck first in the second half as well, with Adrien Perez playing a thru ball to Lee Nguyen to put the ball in the back of the net. Columbus came back and eventually won the match 4-2, LAFCs first preseason loss. But remember, it's just preseason.