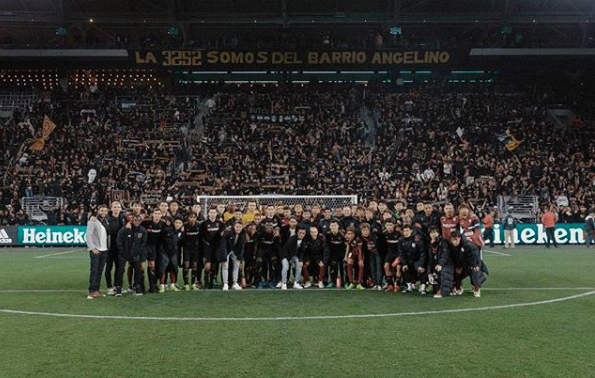 It was nice to be back at the Banc. A Thursday night preseason friendly against Vissel Kobe FC with 18,000 people. Wait?! 18,000 people at a Thursday international friendly. Welcome to Los Angeles. Anyway,

LAFC came into the match in a 4-3-3 formation, with Miller in the net. Shaft Brewer Jr., newcomer Eddie Segura, Tristan Blackmon and Jordan Harvey. Eduard Atuesta, Andre Horta and Lee Nguyen. Vela, Rossi and Dio started up top. 32 minutes in, LAFC found the back of the net, from a classic Carlos Vela shot. 10 minutes later, Carlos snuck another one in. 2-0 to LAFC at the half.

The second half began with plenty of changes to the roster, as this is a preseason match. Tyler stayed in goal, coming out for Phillip Emajidu later in the match. Latif Blessing, Ricky Lopez-Espin, Alejandro Guido started the half up front while, Adrien Perez, Peter-Lee Vassell  and Javier Pérez took the middle. Amadou Dia, Lamar Batista, Dejan Jaković and Shaft Brewer finished up the second half roster in the rear.

72 minutes in, Dejan Jaković added another. And to finish it off, Kevin Mendoza netted the fourth and final goal. Vissel scored one as well. Well, my computer is at 5% so I'm going have to finish this off. LAFC came back to the Banc for 2019 and started off on a good note. This is going to be a good year.