LAFC come back and tie Atlanta 2-2 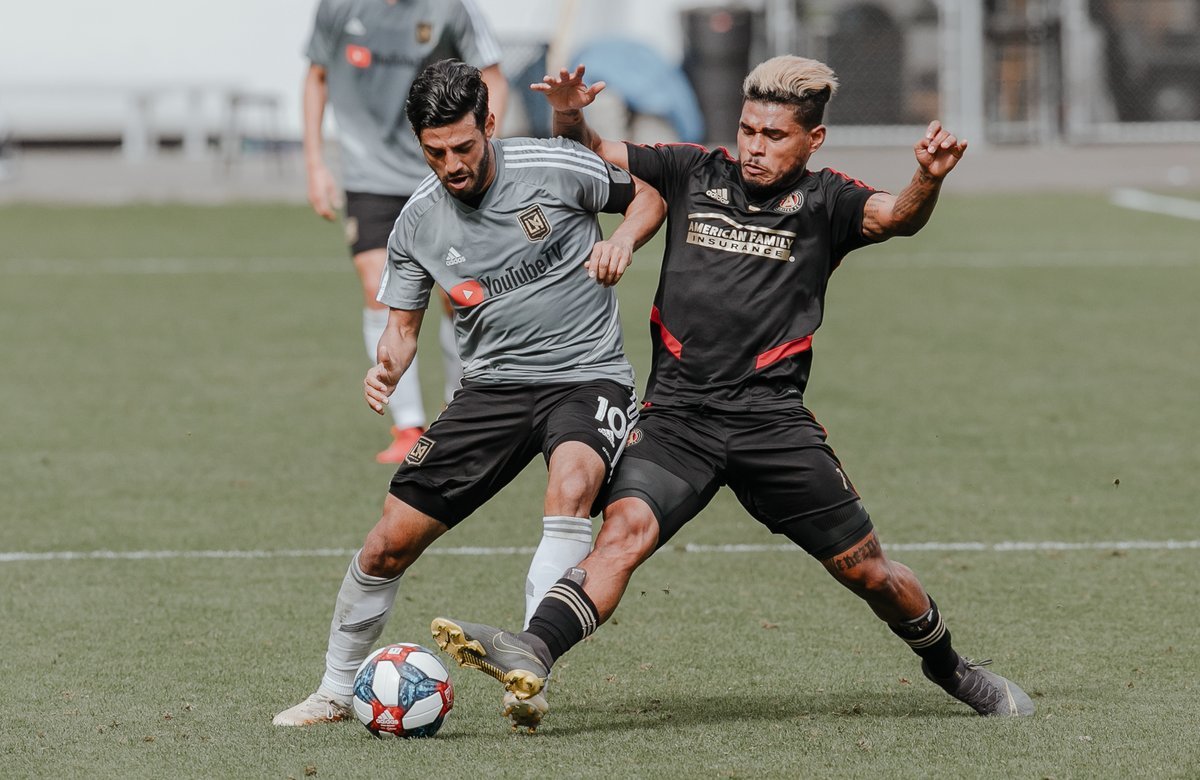 Bob Bradley was not happy with the teams performance. "Overall, there's a lot of good football in the first half but it's got to be that now the things we try to do get done at a little bit faster level, a little bit harder level. So it's this attempt of trying to do nice things but not doing any of it in a strong enough way to add up against a good team," Coach Bradley said in his comments after the match. "Maybe if we play the exact same half against a different opponent, maybe at halftime we'd be up 2-0 and all you guys would be saying, 'Oh that was great.' And I would say, 'No, it's not that good.' And you would wonder why? It's because I still know what it looks like on those other kinds of days."

LAFC started the game in a 4-3-3 formation, as seen in previous games. Tyler was in goal as usual. In defense, Steven Beitashour, newcomer Eddie Segura, Walker Zimmerman and Jordan Harvey. This was Eddie Segura and Walker ZImmerman's first game together. Walker stated that they have been playing around, challenging each other in their different languages and have become friends. In the middle, Eduard Atuesta, Andre Horta and Lee Nguyen. With Carlos Vela, Latif Blessing and Christian Ramirez up top. During the season, we might actually use a lineup like this, with Rossi stepping in for Latif. Diego Rossi is currently getting his green card, which gives LAFC another foreign spot.

Watching the first half, LAFC went down 2-0, like Bob Bradley said, it was anyone's half and they got their chances off. But the way our defense played together looked really good. What I saw that I haven’t seen yet, Jordan Harvey and especially Steven Beitashour were running the lines really well, going up and playing as midfielders at some times.

The second half started with LAFC only 3 substitutions, with Shaft Brewer Jr. coming in for Steven Beitashour. Adrien Perez came in for Christian Ramirez and Mark Anthony Kaye is back in for Eduard Atuesta. Adrien Perez rounded Brad Guzan and put one in, making it 1-2. LAFC made 3 more subs, with Amadou Dia coming in for Jordan Harvey. Javi Pérez in for Andre Horta and Peter-Lee Vassell in for Lee Nguyen. Near the end of the match, Carlos Vela leveled the match, and the game ended 2-2 being a well fought match for LAFC.