LAFC Does It Again and Walker Wins It in Extra Time 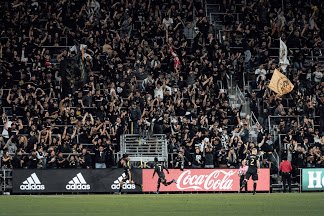 And we have done it again. Walker Zimmerman scores a banger in the 91st minute to give a well earned three points to the Black and Gold But let’s take it from the top.

One word that was on the player's minds about this match was revenge. Why? Well, let me tell you a little story. The day was November 1st, 2018, a Thursday. It was the knockout round of the MLS Cup Playoffs. 3rd place LAFC was set to take on 6th place RSL. But once you make it to the playoffs, the season doesn’t matter. Anyone can win. And RSL did. They took a 1-0 lead, LAFC came back, courtesy of Danilo Silva and Christian Ramirez. Then, Salt Lake scored two and knocked LAFC out of the playoffs.    So revenge was definitely a topic.

Being the International Break, LAFC were down two starters, including forward Christian Ramirez, off with the U.S National Team, and Mark Anthony Kaye, off in Vancouver with Canada. Lee Nguyen was also not playing due to injury. He told me he should be back by next week. Bob had something to work with, and in my opinion, handled things very well. Tyler started in goal, with Steven Beitashour, Walker Zimmerman, Eddie Segura and Jordan Harvey in the back. Andre Horta made his first start of the season in the midfield, with Eduard Atuesta and Latif Blessing to his left. Carlos Vela, Adama Diomande and Diego Rossi started up top. Niko Hamalainen, Javi Perez, and Adrien Perez also made appearances in the match.

Then, Walker took a shot. The ball hit a defender, blocking it. The defender also deflected it, putting it in the back of the net and LAFC up 2-1 to win!

LAFC takes on the San Jose Earthquakes March 30th, then DC United April 6th. They are back at the Banc April 13th at the Banc.